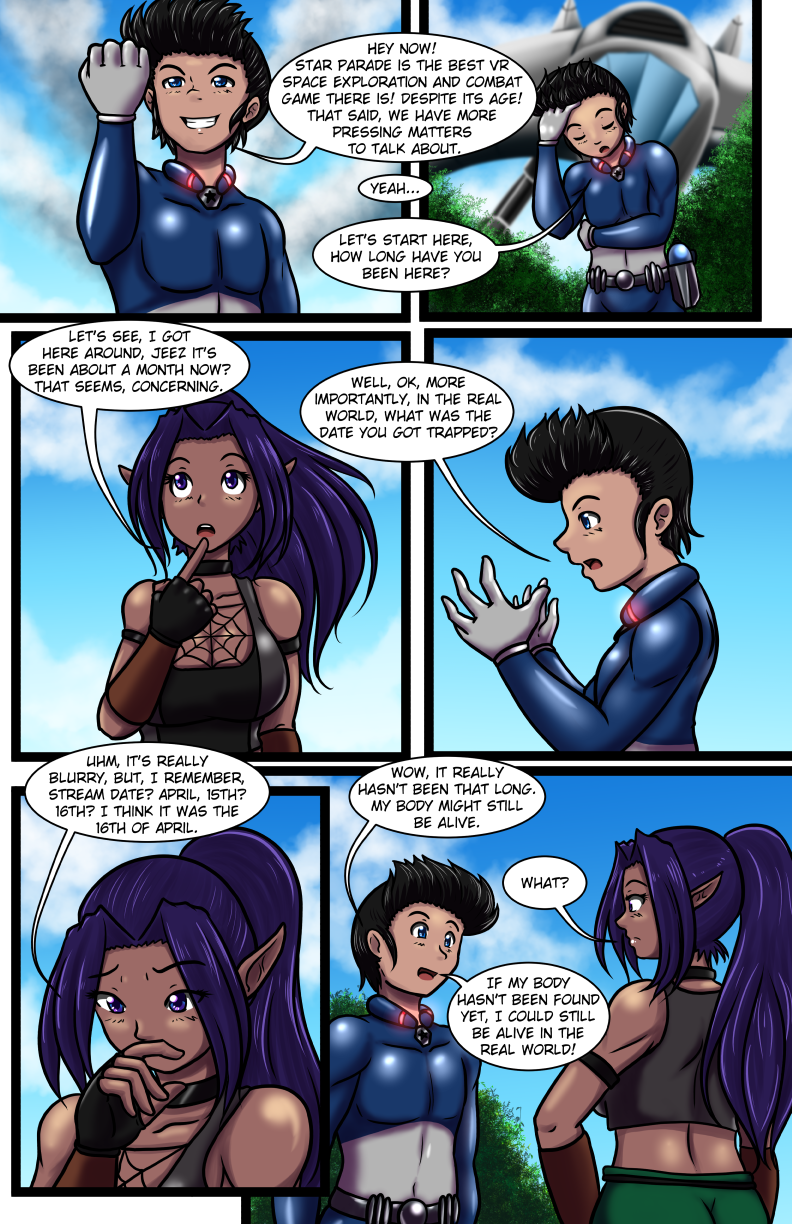 Just to let everyone know. The Site no longer has any advertisements on it. However because of this we need to make efforts to find another way to keep the Katbox server running so if you are interested in helping out we have a Patreon just for the Katbox. Soon there should be a link above the comics to it if it isn’t up by the time you read this, and here is the link as well. Thank you all and we hope you continue to enjoy our work!
Link to the Katbox Patreon Here!

More pressing question, though: what year was it?

A specific year isn’t really important in terms of “when is this future”, but time-flow and time-offset are very real concerns when it comes to reality-hopping (cf. Underhill).

That would be a more pressing question if he didn’t already know the answer.

I think he makes the assumption that both of them got trapped at or around the same time. He also makes an assumption that the jump of game time for them was instant in reality and not a long process and that the speed of time relative to reality is the same as before the event. If any of those are not true, then more (or even less) time could have passed than he assumes.

Also we did know of the disconnect event in real life (from the chat logs) and that means it was not a simple copy on write event, when an object state is copied without the original one knowing. Getting a player/AI personality snapshoot and transferring it to a different server would have been possible that way, even without the real life player and its controlled character AI knowing.

With the disconnect event, it was detectable in real life too. If it happened with too many players, then it might have been noticed and players located. It’s even possible that the real life players just lagged out of the games and woke up without any ill effects. (any VR system should have this failsafe feature as a minimum)

Without any new input from the outside world, this is just speculation though and as i said in an earlier post, a second or millenia of real time could have happened between the event and the current in game time.

Then there’s also the fact that their sooming that their bodies didn’t get fried the instant they were transferred. Or the possibility of them being transferred to another world into new bodies. As far as anyone can tell they’re either a in a coma like in Sword Art Online or .hack, Or we could be dealing with a situation where nothing but a charge skeleton or ashes are all that’s left. That all assuming that this isn’t done by something that wants to make sure that it is a one way trip. Remember the guy who created Sword Art Online in the anime? And how he disposed of his body so that he could not go back? What if something similar to that effect but it’s been forced on the players? Again this is a lot of assumption here and I’m assuming worst case scenario where is this guy’s the soothing best case scenario. Another possibility could be a log horizon scenario mixed in with a one way trip. I’ve read the novel translated and from what I can understand the whole premise behind log horizon was an accident period from when I can tell an alien species was trying to create resources from ideas or something to that effect by Crean whole worlds with a template thus creating resources they would need. But unfortunately players got caught up in it purely by accident. There in lies what I’m also trying to point out of a 3rd party or so getting involved in all of this screen a whole world based on the rules of an MMO or multiple ones mesh them together. However I do not know for what reason because all I can do is speculate.

Okay, that is ominous.

Can you be more specific?

I get more .hack// than SAO. Though honestly considering what’s going on, I suspect less paranormal and more downloaded brain copy. The big question is: why.

.Hack-itis seems to be likely in this this. Hopefully no-one based their software around an incomplete game by someone named Harrold

. . .damn it your right this is more a .hack then a SAO but there haven’t been any media lately that reminds you of it so I forgot about that damn but wait so then does that mean they are lying somewhere in a coma in the real world?

(SAO keeps reminding me that .Hack exists and makes me miss it)

I don’t think they’re in a coma. The feeling I get from it is that their minds were partially copied whenever the incident occurred, thus Kaylin and possibly others are AI with knowledge of the real world. (Also look at the title)

One of the reasons why I think this is what has happened since the incident. Kaylin’s memories of the real world started to fade, making her write stuff down in a book, so even if she forgot she would have a record. Possibly from the system trying to correct what it perceives as errors.

But there is more information to be had that we do not have yet. Such as:
1. Why are there so few PCs?
– Was what occurred with Kaylin and Mike random?
– Required specific occurrences?

Why the time jump?

How much time has passed since the incident RL?
Did the system speed up the world, or is it 1:1 scale?

What is going on with the system?

Why has a PC from another game just crossed over?
Were these MMOs on the same systems?
Is there some greater AI that is merging MMO worlds together?

Reitterating: What is going on in RL?

What caused the incident?
What happened to their players?

For me it’s more along the lines of both tron and log horizon. And that’s all sooming that they have ability to go back. There is the absolute possibility that they don’t have a body to go back to because it could a been destroyed the instant they were taken. And there probably are more players out there but it’s probly because they have multiple MM o’s or other type of games out there that are like a memos that remind me of thinking of a Elite dangerous space SIM with billions of planets all of which could be their own MMO with one player or a couple dozen and all them spred across the entirety of said planet. Just about anything here. But I got the feeling it’s more complicated than that including mashing more than 1 world into 1 gigantic set up like Eve online even.

well to be fair to the question of the other MMO PC: it is likely that he is from a game sponsored by the same company i.e. yeah they are probably on a server farm owned by the company that made both MMOs

thinking about it this is probably why I thought SAO and not .HACK or something else SAO is on of the only series where players get trapped in a game and get moved to another game I am speaking the SAO to Alfhiem plot in Season 2 of SAO that was some crazy shit especially when you throw in the whole we are experimenting with Mind control/Memory Manipulation seriously that series goes dark fast

I wish my body was still alive in the real world…

It seems to me that he’s thinking that he just can’t log off, and that someone outside the game will eventually ‘wake him up’.