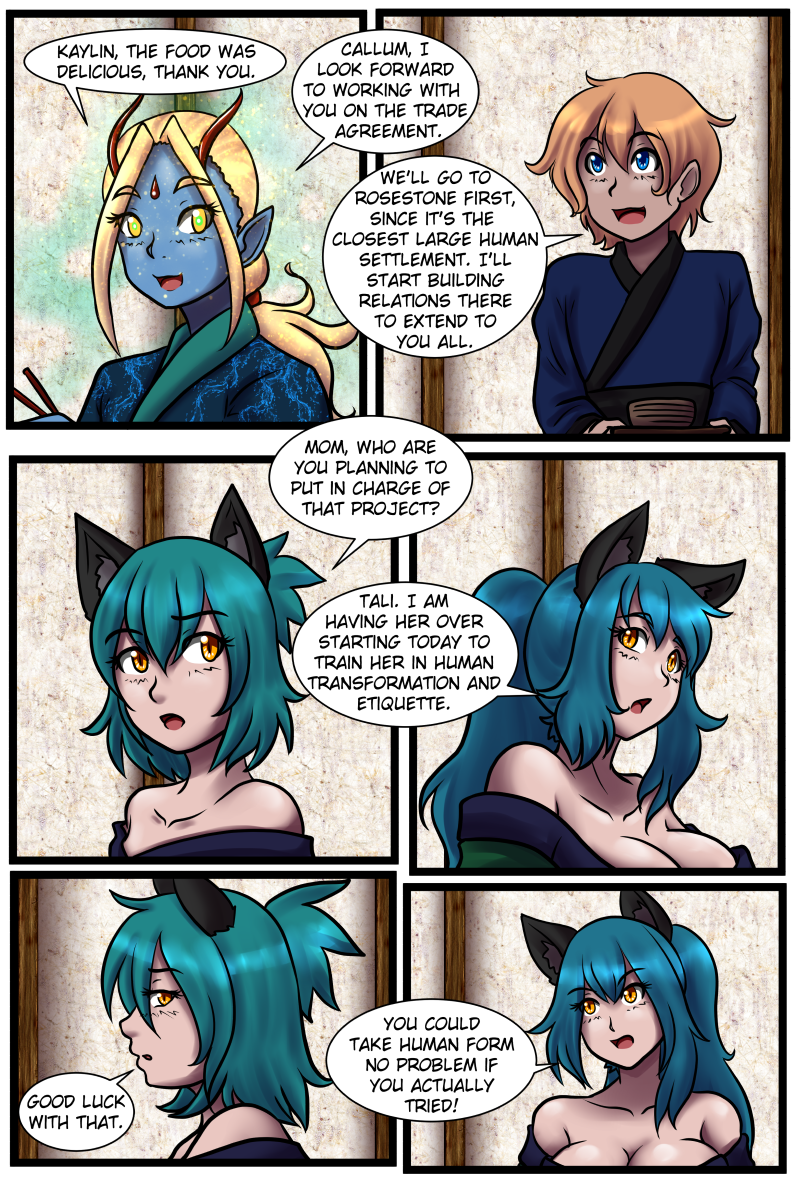 Tali had a scene cut for time but she will make an appearance at the end here. If you don’t remember her, she’s the werewolf girl that used to be Nyna’s girlfriend.

I don’t get the “cut because of time” bit…we’re not going anywhere and it isn’t like there’s a commercial break to fit in.
Artists are famous for saying “I cut these scenes to make the story go faster” then later on say “I ran out of buffer so we’re on hiatus” o.O

Some fans are known for complaining story isn’t moving fast enough, but then also complaining that the story didn’t fill things out.
As a creative it’s a no-win situation.

It affects the phasing of the story which can drastically change how well a story is recived.
There are plenty of examples of stories that goes too much into details and side plots to the point nothing happens and people stop reading becouse the story is too slow.

For webcomics technically you can just drone on and on for weeks and months, but AI is made to be readable in a physical format and you need to limit things in comics and movies to match a certain flow and time. I chose to make the chapters in AI to be 26 pages for this reason. This forces me to cut back on talking heads as much as possible, but it isn’t completely avoidable as characters discussing things is one of the most natural ways of setting up their plans and getting everyone to understand their goals including readers. With a limit though I know I need to get these scenes done within a chapter while including other important scenes, and I need to make sure that within every 3 chapters there’s a certain amount of action or drama.

This way, when someone buys a book that contains 3-5 chapters they don’t end up with nothing but people talking back and forth but instead get what is promised, story progression and characters doing cool stuff.

As for people who say they cut scenes and then have to go on hiatus- These are two totally different things.

You cut stuff so that the flow remains solid and you dont take away from progressing the story and showing really fun stuff for the reader. You go on hiatus not because you cut stuff, but because you have caught up to the work you did before. Adding in cut content does not help prevent that, it gives you more work that doesnt progress the story. A buffer is work you have done ahead of time. Assume the story updates once every week. That person might have a buffer of a month, so they have 4 comics already done, ready to post. They make a new page for it every 8 days. That means they arent quite able to do a 1 a week schedule. So eventually they are going to overtake their buffer and have to stop, build up a new buffer and go again.

Personally, I don’t do buffers. AI updates once a week, I always do that page that week. I also do 2 Pages for Yosh! a week, and I do commissions and Patreon work and- I have a NSFW Patreon and Substar that all need work too. I can’t just draw every part of my story, I have to cut things to keep up, as do all artist. I think writers can get away with cutting less- but even writers need to cut things, artist need to cut even more, and animators even more than artists. That’s why it is such an amazing thing when you watch a 2 hour movie, based on an 8 hour book and you feel like, while it didn’t have everything, it was still really well done- and that is an amazing work of art. To cut something down, retain the message and impact, it’s an art on its own.