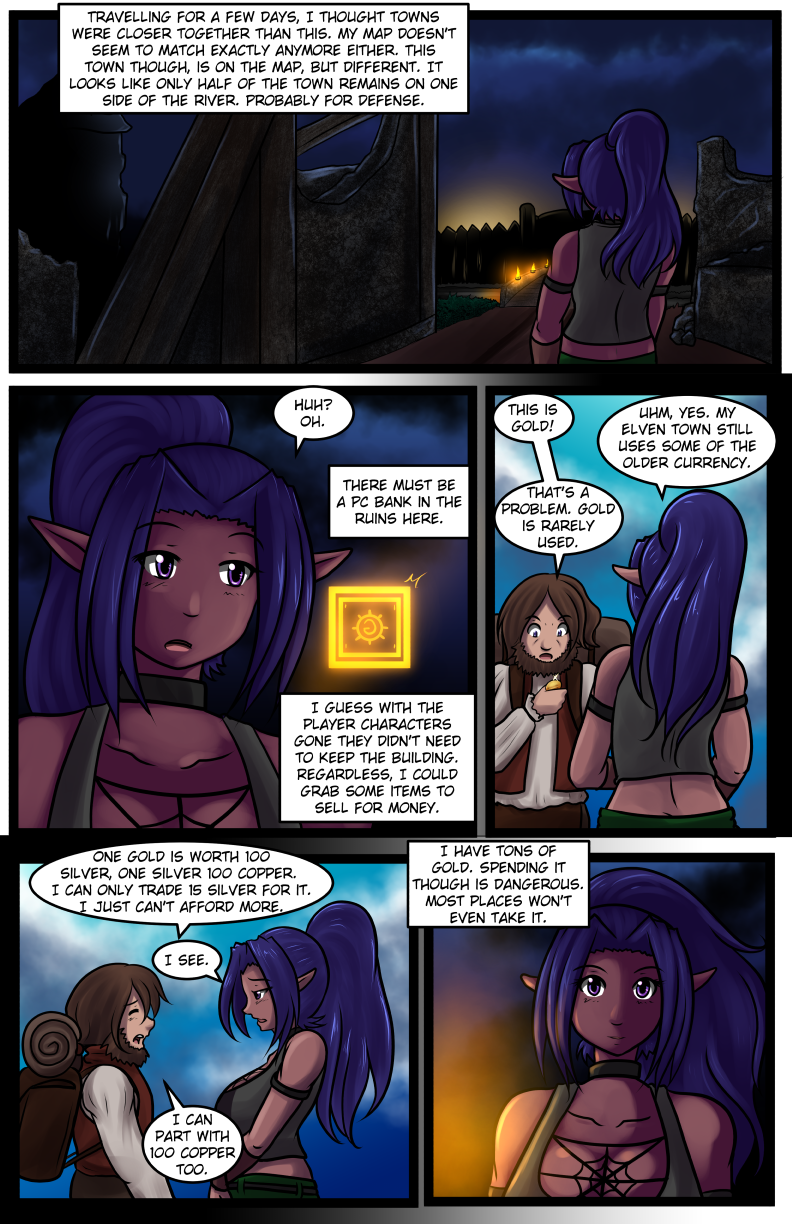 So he is one of the rare players left on server (the only that he knows of, anyway). Wonder if that mean that particular game server/shard suffered an anomaly, while the other, which the rest of the players still access, are fine.*

Are panel 3 and 4 a short flashback ? The sky is a lot brighter.

Yes. The fade to black behind those 2 panels and back is an indicator of a flashback.

From the description of the situation, there are no players at all. So it could be that all players are gone and only NPC-s and some of the player avatars are remaining. The NPC-s seem to have modified the gameworld slightly and some features, like fast travel is not working correctly, but some, like player banks are operational. The big question is if it’s possible to contact the outside world or not? I would say it’s probable that it’s not possible to do it from within the gameworld, otherwise the incident would be explained immediately by the first real life player. (it might happen that players are actually logged in and running their avatars, but left unconscious in the outside world, but probably they would have been contacted by operators by now) This is just a theory of course…

Rather than the gameworld being modified, I think it sounds more like those stories where the player finds themselves in a “real” version of that world. It’s also why there would be real distances between towns, instead of all being within a five minute walk of each other. Without the over-abundance of overpowered immortals, settlements have had to shrink back their borders, and “wall up” wherever possible, as well.

The presence of the bank hologram and that it’s still working is a pretty good indication that this is the same world and still in virtual reality from our standpoint. The chat indicated that at least some players were disconnected from the server, while the outside world remained, at least for some time. The time cut between that event and the main character appearing again is unknown. It could be any amount of time both in game and in real life (from a few hours to several years). Kaylin’s resuming could be caused by the disconnect event or being not properly logged off. Maybe some of the npcs could tell about what happened and how much time has elapsed. Checking the system time (if it’s available in game) might also give a clue. It might be a problem if npcs don’t remember or were programmed to not recognise players as different than them. In the latter case they could still tell what happened from their perspective and that might also give at least some clue. Asking about recent and more distant events from every more or less intelligent npc might help. Finding another ‘lost’ player avatar might help, but they could be just as clueless as the main character. Finding out what’s up in the outside world might be harder than it seems if currently there is no connection to it in any form.

ps: Above i was referring to the fact that a vr simulation could be left running for any amount of time and any ai instances running on it (or even the whole simulation) could be suspended and then resumed, regardless of the time between the two events and if the simulation is still running on the same computer system. If there is no external interaction (aka. irl players), then a simulation could be forked and run in multiple instances, differing only if there are external inputs, like different data for the random number generator.

As I said, there is too much evidence that this game became real, and isn’t just a simulation running without user input. The world is bigger than the in game map, NPCs have lives, and gold hoarding actually left a gold shortage.

“With the player characters gone”… wut?

That line was to explain that so far she hasn’t had any luck at contacting a single other “PC” and from what she has heard so far- well it will be explained more in a few comics. This chapter is all about setting up the basic understanding of then and now after all. Thus the title of the chapter.

Yeah, because thinking about it, now I’m curious about not only if this Kaylin has any of Kevin’s memories or just thinks of him as a different person (and is truly the RP’d character), for some reason this page made me just now wonder if this literally is a different world, just one suspiciously similar to the game world, except this one is real.

“With the player characters gone…”

What the hell happened that we haven’t heard about?!?!

Yeah, the economics of RPGs and computer games is insane. Ten GOLD coins for a beer? Cripes! Glad to see this won’t be falling into that hole, at least.