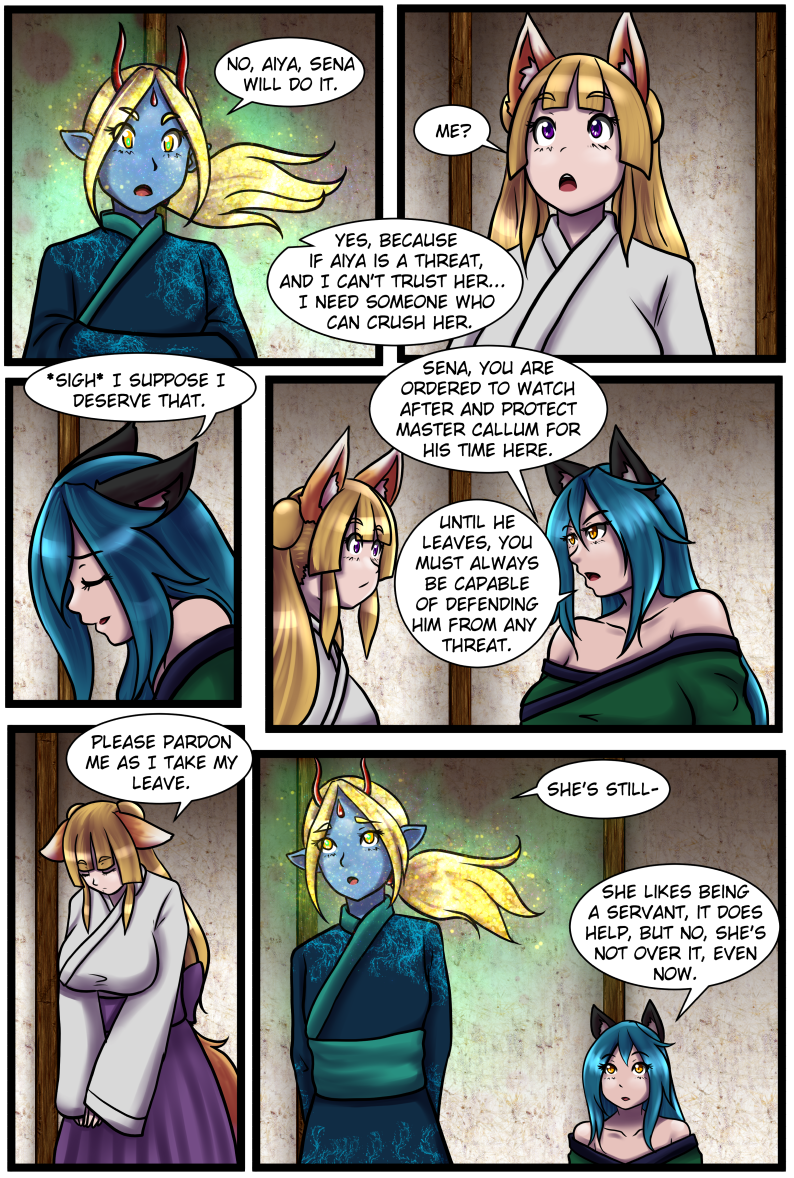 Callum is certainly a higher priority to the gods than Kaylin it seems.

Over what I wonder?

We have too little info to make much more then speculations right now.
My first guess is a power struggle happened and somebody she loved died becouse of her position in it.

For example, she might have been first in line with a leadership role in the village, but because people supported her they died.
If so then this might be her way of making sure it never happens again, by working as a lower-ranked.

this is 100% speculation made by extremely bare-boned information and is very likely incorrect.

It sounds to me like Sena was up for ascendance to godhood, but Sena and Elli got the spots due to something happening.

Am I reading this right and Sena is even more powerful than Aiya!?

It’s what’s implied. And if she’s an elder kitsune, that would make a whole lot of sense.

I think, we need some backstory for Sena. Something happened to her, a loss or something else.
Let’s hope she will be alright.

It’s interesting that it’s implied that Sena would be both capable of and willing to crush Aiya, should this goddess-given-duty require it, and yet at the same time it’s Aiya that relays it to Sena as an order. In spite of Sena’s deference to Aiya, it seems clear Kaala has no reservations that loyalty to her will take priority if push were to come to shove.

She may even be a fallen goddess that couldn’t stop or did something and got displaced or drop to mortal status to repent for it…..just my thoughts.
I like Sage’s keep all of us in the dark as it makes the comic much more fun to talk about and wonder what will happen next. Keep up the good work!!! And it keeps my bad jokes out of the lightt!

No, and as expressed in the comic it is not Kaala that want’s Callum protected specifically. Kaala is following orders.

I still smell a mom moment.

Callum has also been ‘here’ for two years, by his own reckoning. I can’t help but wonder if arrival times are just randomized, or if his earlier appearance has meaning. At minimum it would be time for the gods to become aware of him, but this feels like more than that.

As for Sena… I commented on an earlier page that it felt like she and Kaala share a connection that makes it awkward for the goddess to see Sena subservient to her. Maybe Sena just /enjoys/ the role, but Aiya’s reaction suggests there’s more of a reason for it.

Since speculation is half the fun, here are my current theories (in no particular order):
1. Kaala and Sena are both ‘trapped minds’ similar to Kaylin and Callum, making it awkward for Kaala to see Sena like this. Has the potential for one of them to know Callum as well.

2. Kaala and Sena were both subordinates to the former God of Monsters. It’s possible Sena’s attitude for what is ‘proper’ came from that experience. When Kaala ended up slaying him, she rose to Goddess while Sena held on to her past mindset.

3. A little crazier – Sena could actually BE the former God of monsters, after Kaala deposed him and changed him into a mortal form to keep him/her in check… and maaaybe overdid it a little with the servant programming. Would explain the “not over it” comment.

Either way it’s fun to keep us guessing, and I’m guessing it’s entertainment for Sage as well!