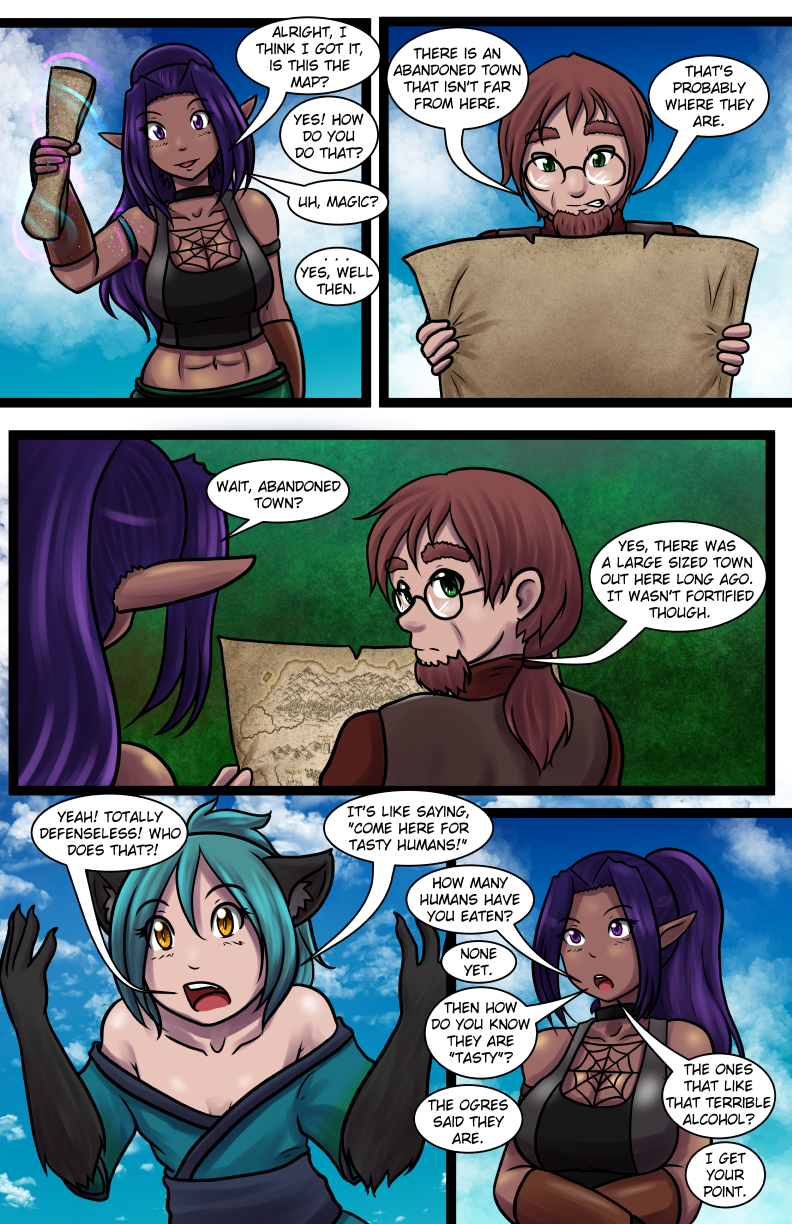 Happy Thanksgiving folks! As this goes up the day before Thanksgiving – the next wont be till after so better early thank late?

Unfortunately for Kaylin, her line of logic is flawed. While it is most likely that Nyna and the Ogre’s senses of taste do not align, it is possible that humans do taste good and the Ogres just like crappy alcohol; I have meet people like this. But this is a good chance to steer Nyna away from human based cuisine.

aren’t human’s just crappy tasting pigs I mean to a degree? we do have the nickname long pig I mean

cannibals have been known to say that human flesh is similar to pigs or young calves.
and of, the classic, everything taste a little like chicken.
ofc they themselves are usually not the most trustworthy of characters, but it is a common opinion at least.

the means you acquire the human meat is usually the problem, as eating flesh is not illegal in some counties by itself.
but you are usually not allowed to be in possession of flesh of other people without their consent when it isn’t, or similar laws limiting the acquisition of flesh.

unless you feel like chopping your own arm or leg off to try, or manage to roll ten natural 20´s with max charisma and get someone to do it for you. there is not alot of legal ways to get your hands on some 😛

even if they themself ask you to kill them and eat them.
or if they ask you to chop a leg off, it is not allowed. as you would be accused of murder and mutilation of another person.
but if they themself do it, or somehow donate a lost body part from say an accident. then you might be good to go as then its not your fault the body part was separated from the person in question, but again there is only a small number of places in the world where it would be legal to do in the first place.

and also there is that moral question about it, even if morals and laws are different things.
people is likely to look down on you for eating human flesh even if you dont break a law.
if you somehow have a way to get some flesh without being illegal in a place where it is ok to eat, its not my problem and you are free to do what you want.
just dont break any laws or moral codes doing it 🙂
here is to hoping i don’t get banned for discussion a controversial topic i personally find interesting, even if its kind of morbid.

I should really know better than to read these comments while I’m on a diet.

um to what context do you mean that cayleygraph2015?

well not that that wasn’t insightful or anything but the only reason I commented on the fact that humans probably taste awful is that well in general we don’t eat really good things if given the chance we take what will give us the energy to live to the next day or taste good rather then what is good for us.

So as result we generally have really poor quality when it comes to choices for meat I mean in this world I doubt everyone has lv.max cooking skill so yeah chances are they are probably like us awful smell, poor taste, not fulfilling(as a choice of Meat/Protein) in the least as a meal.

I mean in general the only thing you could probably gain from human meat as a meal is a uniquely tasting meal that is it probably not good, probably not bad, probably shouldn’t trust someone who likes awful tasting alcohol as a good reference for a meal even if tastes are unique if they willing choose to drink $1 whiskey instead of 100 year old fine aged brandy that is $10,000 a glass they are definitely not a good source of info for anything that will taste good.

I speak partly as a sense that well Nyna is a Neko she would probably prefer a good poultry meat or fish rather then something that is compared to Veal or Pork also that sterotype of chicken is B.S.

Only plus I can imagine, in favor of eating people, is that monsters probably eat meat with magic in it and humans would likely have more magic than the average livestock.

what about none at all?

This shows that she’s tasted that “terrible alcohol.”

I have to wonder if Kaylin knew this town before it was abandoned.

Since it was on her map, she at the very least knew of the town. Maybe visited it, but definitely knew of it.

Suprised the cyan girl doesnt have big boobs, i see a trend in these katbox comics x)

This is what, the third or fourth time I’ve mentioned this but… I wonder if anyone other then Kaylin will notice Nyna’s only wearing that kimono thing, no underwear on that Nekomata.