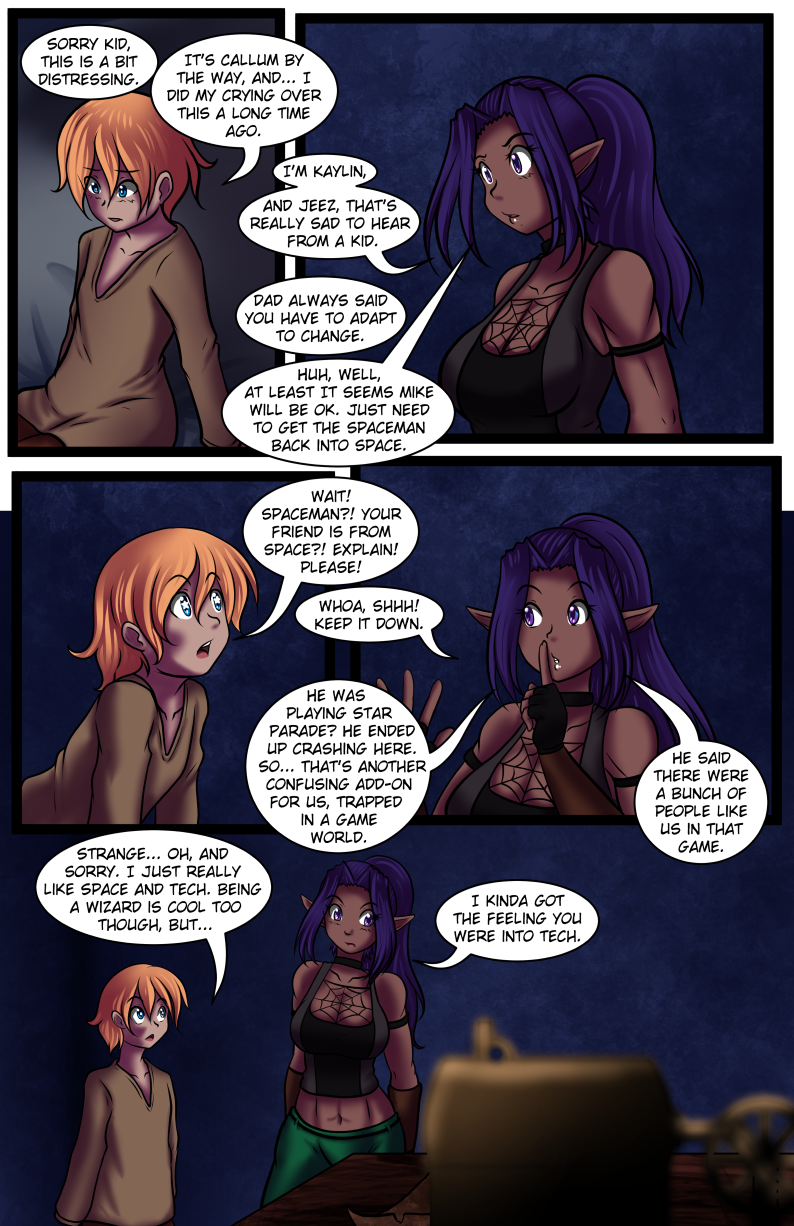 At this point I have no idea what is going on in the “plot” I’m just here to see Nyna be cute While Kaylin trolls people.

Wait, is that not why we’re all here?

It’s not for the free parking. Anyone got a dime for the meter?

This is disappointing to read, I don’t know how someone could get lost this early in when their goals have been laid out relatively recently. So now I need to question if your just making a joke, if you are seriously lost, and if so, what is the cause and are others having the same issue?

I think its the long setup, collecting all the players etc. without a clear enemy. No bad guy who is responsible to fight, so to say.
For me thats ok, people in comics have time and you can meander through the story, explore the characters etc. Its still the “Whats going on” phase.

In contrast In various Isekai of the game type you often have a way out, layed out from the beginning. “Sword art online” did it in the first episode, revealing the big bad evil guy and the goal for the next 16 Episodes.

AI is, to me, more like “log Horizon” where you have a less straight forward game plan and people are trying to make the best out of the situation. The final goal there was pushed aside for more emidiate goals that were solved in interresting and awesome ways. Like “how do we break the Money mechanic”, “Lets make eatable Food” and “Lets break the abusive guilds”.

Also In most those worlds you have the rules layed out by say Game genre (DnD? MMORPG? JRPG?), preexisting people that can play of one another etc. so its jumps straight at the main quest without needing the viewer to learn the basics.

AI takes its time (wich imho is good) shows more of the world, the weirdness, Nynas cuteness, building relationships that werent preexisting etc. . We didnt see much of the original MMO and what we see now is long past that MMO. Even the rules have changed considerably without neither the characters nor the reader initialy knowing what and how they changed exactly.

Because of that Ai can appear a bit slow in the beginning but i think its needs that time to grow into another awesome webcomic.

We are not all lost at least I’m not after back reading the entire comic. Just not making as many jokes or bad puns like I did in the past. There are just many paths that can be taken on what is happening in this comic and every one has a idea or two on what path may lead on further down the road as what is going on. You Sage know what is as you write,draw,and plan it all and the more we all wonder, the better the comic gets. Ilove it!!

It’s the webcomic curse. Some people reading won’t remember plot points from months or even years in real time ago.

why are we still questioning this? its obvious the company that makes the fantasy game makes the space game and probably several other VRMMOs too they are all trapped in different ones and all the different ones are now somehow all connected to each other and somehow trapping players in side them its not that complicated but then again that is the problem the solution well we all still f***ed with that

Relax, this is the first time the kid has heard about it- wouldn’t it be even more strange if you mentioned this factoid and he was completely un-phased by that information? Of course there’s some relationship between the games, but it hasnt been said what yet so I dunno how “obvious” it really is, right? I mean thousands of games are made by different companies but run on the same engine, right?

There are some game engines that many games from different companies use, Unity & Unreal are the big names that a lot of games are made with, though many companies use their own custom built engine (Bethesda is a big name that does). I imagine there would likely be less variety in the engines for for ‘full dive’ VR games due to the hardware (biotech?) involved in making such a thing possible.